Let's talk about cancer, the big "C". Five and a half years ago I was diagnosed with colon cancer. The cancer was large as colon cancers go and had done some small amount of spreading. I had surgery immediately and a month later chemotherapy began. I started seeing my oncologist immediately after the surgery. I had chemo for just under six months and it ended with a nine day stay in the hospital. I had developed an antibiotic resistant blood infection and then a DVT.

It was a very difficult time. I had just made a great life change and my family relations with my ex partner fell apart and I had just been laid off from work (that's a story in itself.) I had to deal with the cancer along with all that and oh, yes, I had kidney stones also! But, I survived!

Friday I celebrated a mile stone of sorts. My chemo therapy ended five years ago. I had a CAT scan, blood test and oncologist appointment and there is no sign of cancer! I know that that isn't absolutely definitive, but it is really great. My Doctor was all smiles and so was I. He will be ordering no more CAT scans for me and I will now have yearly appointments. I guess you might say I graduated. This is all good! 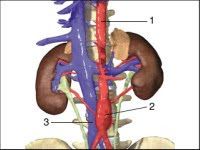 Whenever there is good news there often is not so good news. CAT scans began with the cancer and the first one found the kidney stones. Those stones caused me so much grief during chemotherapy! Ultimately they were the cause of the infection I contracted. The also found that I have an Aortic Aneurysm. Technically I guess it is an Abdominal Aortic Aneurysm. I am told that this is more common in individuals with long torsos (I do), and those over 60 (I am.) The news is that the aneurysm has grown since the CAT scan last year. I need to follow up with the vascular surgeon, who will now need to order test to monitor the aneurysm. Aneurysms are enlargements of blood vessels. They are dangerous if the grow large and push on something vital or if they break. I am told that they need to be monitored until they reach a critical size. The Doctor knows what is critical. For me it is just one more thing to worry about. My aneurysm is 4.9 cm in diameter. Surgical intervention is usually considered at 5 cm to 5.5 cm. It is major surgery, so I am not in a hurry to have it, but if it is necessary....

So much for my health. I have some other new material I will be posting soon.