I spent over 20 years living in Meriden, Connecticut.  As a town goes I guess you might say that Meriden is pretty average.  I do not mean to slight the community in the slightest by this.  I lived there a long time and raised children there and I still have family living there.  One of the very nicest places in Meriden is Hubbard Park.  Every year in the Spring Meriden has a Daffodil Festival in Hubbard Park. They have a parade and a couple of days of exhibits, rides and food of all kinds.  The kids liked it when they were young.  One of the nicest parts of this was Spring itself and of course the daffodils.  Meriden always made sure that there were plenty of daffodils.  The video below is made of slides I took just before the Festival.

One of the more interesting things about Hubbard Park is that there are Dinosaur tracks in the park. The kids always liked them and me, being a big kid at heart, I still like them! Apparently Central Connecticut was a sort of Jurassic Dinosaur playground.  These are fairly large and are probably from a Theropod called Eubrontes.  Theropods were carnivores and we are probably all familiar with Theropods like Tyrannosaurus Rex which came much later.  Eubrontes is so common in Central Connecticut that it is the state fossil.  that's funny I thought I was the state fossil!  Guess not.  The picture was taken on a rainy day and some of the tracks have water in them. 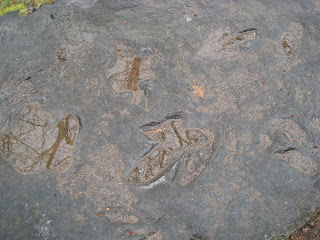